Hidden away in the Carmes district of Toulouse, the Gesu church, built in 1860 by the Jesuits, now belongs to the City of Toulouse. The building no longer functions as a church and is now dedicated to music, serving as a venue for several cultural associations related to classical music: Toulouse les Orgues, L’Ensemble Baroque de Toulouse, Les Sacqueboutiers, Antiphona and Les Arts Renaissants.

The Gesu Church is open on Heritage Days and during the events held by each of the organisations, but is closed to the public outside of these activities.

The Gesu Church takes its name from the Jesuits, who originally built it. In 1853 the Company of Jesus bought the old Sénéchaussée building together with a large plot of land. After the Sénéchaussée and a long stretch of the former Gallo-Roman city wall were demolished, the Company commissioned the architect Henri Bach to build a large church in the neo-Gothic style, and a school for novitiates.

The church was not attached to a parish and was alternately open to the public and then closed and then re-opened and closed again. The Jesuits later met in a section of the St Stanislas novitiate school. As the community got smaller, it ceased all its activities and sold the church to the City and the old novitiate school to the Diocese. After some restoration work, the City ensured that the structure met modern safety standards and turned it into a centre for music and especially the organ. The Gesu now hosts concerts and is a place of work and rehearsals for musical ensembles and organisations all year round. 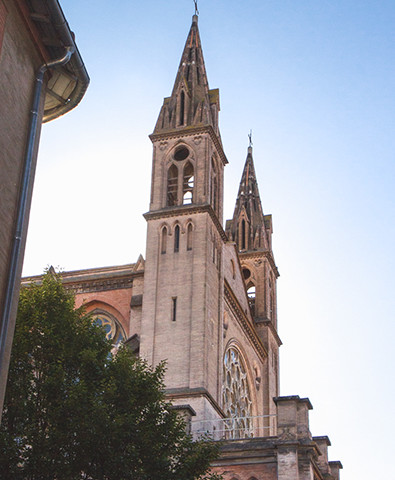 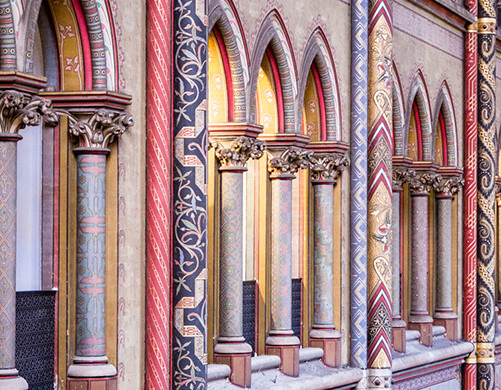 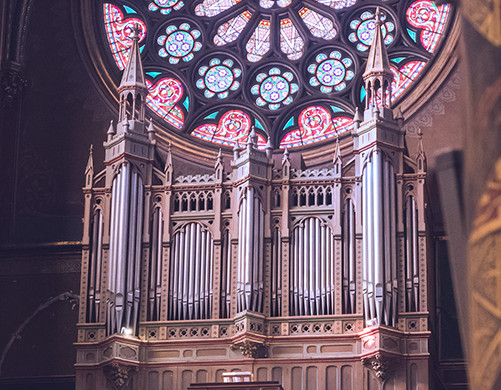 The architect Henri Bach took inspiration from 13th century art and achieved a fusion between northern Gothic and southern styles (the Languedoc version of Southern neo-Gothic).

While the exterior is relatively plain, the interior is highly coloured and its decoration combines floral, geometric and architectural motifs with biblical references.

The murals are the work of the Jesuit Auguste Bach (1819-1890), brother of the architect, and the numerous stained-glass windows are by the Toulouse artist Louis-Victor Gesta (from designs by the painter Bernard Bénézet). The Gesu church was listed as a Historic Monument in the supplementary inventory of 1994 because of these features (stained-glass windows and painted decoration).

The Gesu church is also home to a Cavaillé-Coll organ built in 1864 and listed as a Historic Monument in 1977. After completing the reconstruction of the Great Organ of Saint-Etienne Cathedral in 1852, Aristide Cavaillé-Coll constructed this new instrument, which was inaugurated by Lefébure-Wély.

The neo-Gothic buffet, with its two platforms and three arched turrets, contains an organ of twenty-four stops with two manual keyboards and a pedalboard. Its composition is characteristic of Cavaillé-Coll’s second period.

However, this little-known instrument is one of the famous organ-factor’s genuine masterpieces. The organ builder Patrice Bellet serviced the instrument for more than twenty years, and it is now Jean Daldosso who keeps it in tune and in good repair.

The Church opens on Saturday Heritage Days and during concerts organized by associations.

The Toulouse City Hall handles external requests for the provision of the Gesu church.